North 180th Street between West Dodge Road and West Maple Road will be reconstructed to a four-lane roadway divided by a median. Currently, 180th Street does not connect between Old Lincoln Highway and Blondo Street, and is a 2-lane rural section between Blondo Street and West Maple Road. North 180th Street will be widened to a 4-lane roadway divided by a median between West Dodge Road and West Maple Road, then continuing north from West Maple Road and transitioning back to a two-lane roadway with a center turn lane at the north terminus of this near George Miller Parkway. These improvements will include new bridge structures crossing Old Lincoln Highway, the Union Pacific Railroad, and the West Papillion Creek as well as Whispering Ridge Creek. The roadway will have curb and gutter along both roadway edges with enclosed storm sewer. A ten-foot-wide trail will be constructed behind the east curb of the roadway, with a five-foot-wide sidewalk behind the west curb.

Blondo Street is currently a two-lane rural section throughout the project limits. This project will widen Blondo to a 4-lane roadway divided by a median for approximately 1000 feet on either side of the intersection with 180th Street. This roadway will taper back to match the existing roadway at the project limits at 183rd Street on the west and 176th Avenue on the east. A new bridge structure will carry Blondo Street over Whispering Ridge Creek just east of the existing intersection with 180th Street. Five-foot-wide sidewalks will be constructed behind curb on both sides of the improved section of Blondo Street. 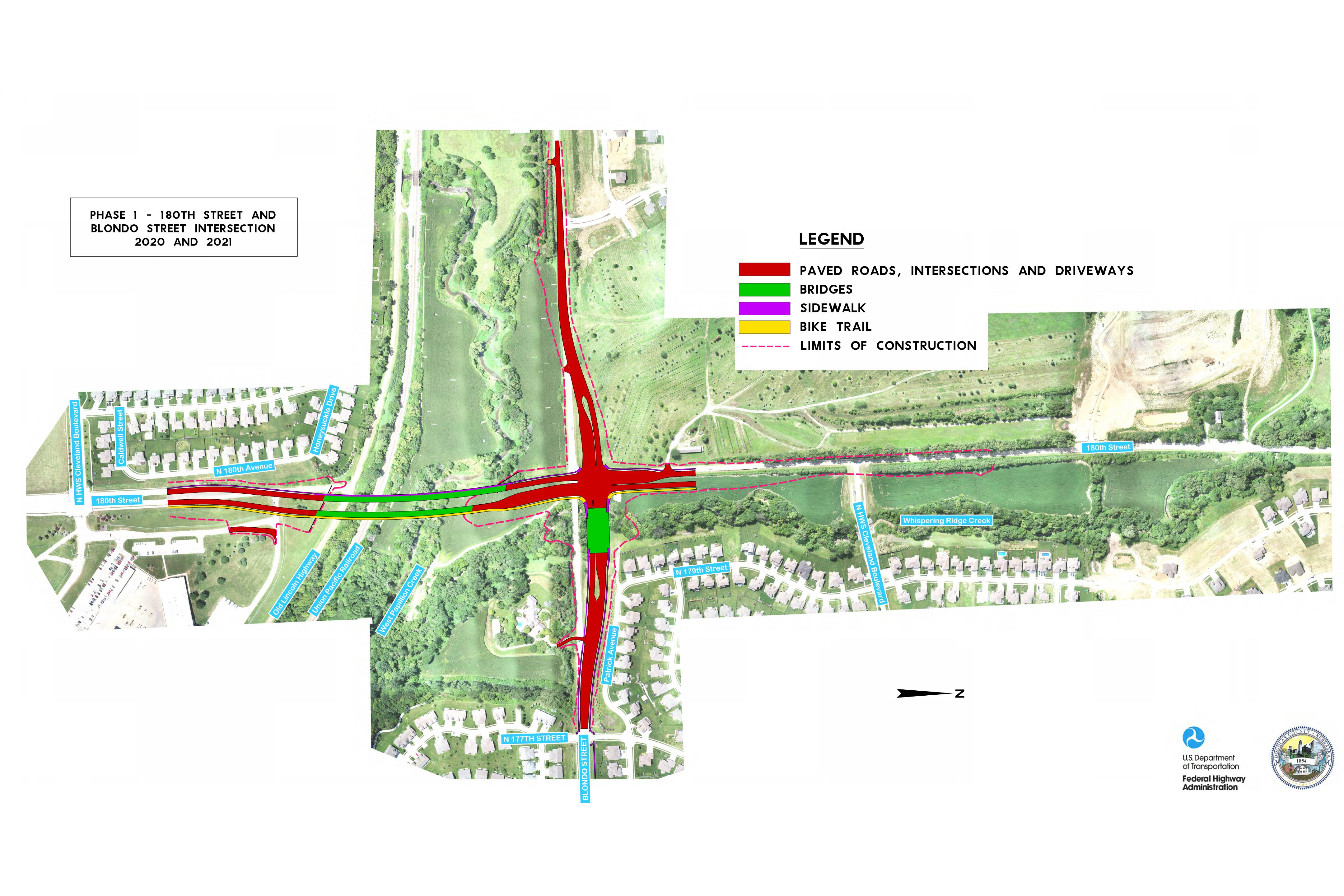 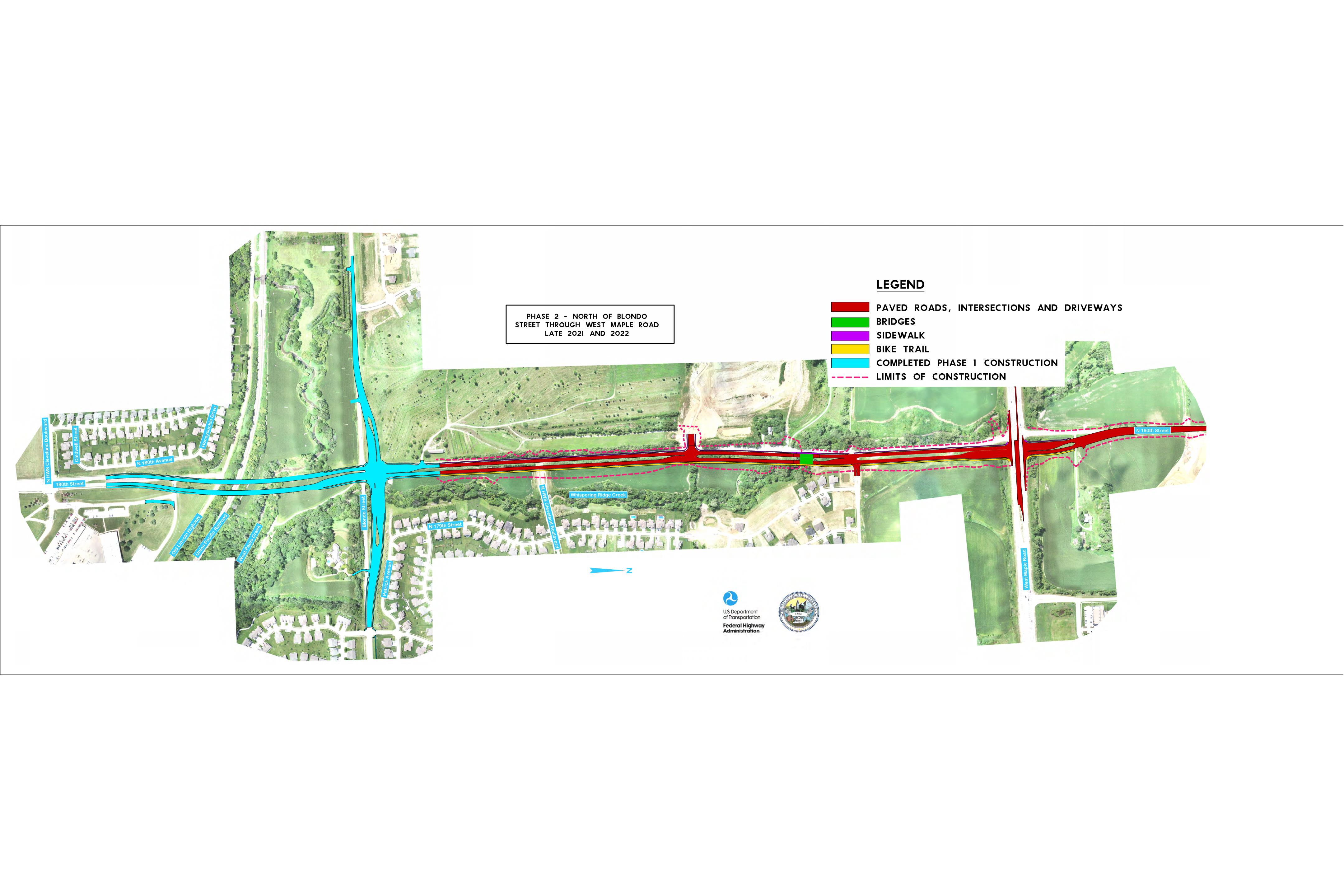 Spring 2020: The contractor will begin site work with tree clearing and will begin to build embankments as well as the new viaduct structures between N HWS Cleveland and Blondo Street. Old Lincoln Highway will remain closed at this time, and construction traffic will be entering and leaving the jobsite via 180th Street and Blondo Street.

Summer 2020: Beginning in late Spring 2020, the contractor will close Blondo Street from 176th Avenue and 183rd Street to allow reconstruction of Blondo Street, the bridge crossing Whispering Ridge Creek, and the intersection with 180th Street.  Work will continue between N HWS Cleveland and Blondo Street, which will require that Old Lincoln Highway remain closed. 180th Street will remain open from just north of Blondo Street to West Maple Road. (updated May 11, 2020)

The contractor will move northward to complete 180th Street from Blondo to the north end of the project as well as reconstructing the bridge crossing Whispering Ridge Creek. 180th Street will be closed from Blondo to West Maple, and from West Maple to the northern terminus of the project at George Miller Parkway. West Maple Road will remain open throughout the project, however there will be temporary lane closures to allow for widening and median construction during this phase.

Winter 2022: Contractor completes reconstruction of 180th Street north of Blondo, and opens all lanes to traffic.

The contractor continues work on the structures that will carry 180th Street over W. Papillion Creek, Old Lincoln Highway, and the Union Pacific Railroad, and anticipates setting beams this fall. They also continue to work on the structure that will carry Blondo over Whispering Ridge Creek, and continue to work on preparation to pave portions of 180th Street south of Old Lincoln Highway in the coming weeks. They will continue structure work through the remainder of the summer, fall, and coming winter, in anticipation of making pavement connections and remaining on schedule to reopen Blondo and 180th Street between Blondo and W. Dodge Road by late Summer 2021.

Please note: the previously scheduled closure to begin Monday, May 18th has been delayed. Beginning Thursday, May 21st, the contractor will close Blondo between 176th Avenue and 183rd Street to begin reconstruction of Blondo Street, the bridge crossing Whispering Ridge Creek, and a large box culvert. 180th Street will be closed south of N HWS Cleveland Boulevard at this time. This closure is anticipated to be in place until Fall 2021.

Beginning May 18th, the contractor will close Blondo between 176th Avenue and 183rd Street to begin reconstruction of Blondo Street, the bridge crossing Whispering Ridge Creek, and a large box culvert. 180th Street will be closed south of N HWS Cleveland Boulevard at this time. This closure is anticipated to be in place until Fall 2021.
Work continues on the viaducts between N HWS Cleveland Boulevard and Blondo Street, and the contractor will continue earthwork and storm sewer installation in preparation for paving of the new pavement section. Utility work will continue along 180th Street north of Blondo, and construction traffic will be active in the area throughout, so please continue to be mindful of that while traveling near this and other work zones.

Beginning later this week, the contractor will begin clearing and tree removal along the project corridor. Work will begin south of Blondo and progress to the north.  Short term road closures and lane shifts can be expected during this time.  Watch for construction traffic.
The County has installed a construction camera. Please see below for the direct link to view the camera.
https://app.truelook.com/?u=d11586454087
Project Resources:

To provide your input about a specific location within the project area, visit the City Map.